New year, new top quality weapon suggestion by Sinister Arms Inc. I'm really excited to say a veteran has decided to join us to bring you this suggestion, Legovoa. Aka creator of the Terminator & Guardian Angel suggestions that have gotten a lot of support and recognition from the community as being top tier. He joined SAI and possibly will return to help us create even more better suggestions to bring new content to R2DA, props to him for this idea as he's the man behind it.

The M231 is a powerful yet inaccurate M16-style weapon that absolutely destroys enemies at close range, however suffers heavily in the lack of close quarters.

With an important weapon comes many derivatives.

When the M16 was created, and later, the M4, many built off the AR-15 platform for weapons because of the reliability of the system. Nobody, however, expected that someone would bump off the stock and crank up the firerate to a whopping 1225 RPM. While not very notable at the time of invention, many would later come to find stronger use in the battles against the undead, where a high firerate is much needed.

Sinister Arms' lack of previous weapon creation led them to hunger after a weapon that was simple but effective. When studying the weapons once used in modern warfare, they noticed the M231, a very simple, seemingly easy-to-manufacture weapon with a firerate that could butcher even the strongest of zombies within a half of a second. Its simplistic nature and devastating power per unit led Sinister Arms to shortly get working on the M231, and soon release it to many.

For the attachments, I had to select what we can use carefully, given how powerful this weapon is I didn't want to have everyone run around with it like it's P90 or pre-nerf M249

This is basically a freebie, I'll just keep it simple. With this weapon, you'll be running out of ammo very quickly and end up camping near an ammo station most of the time if you're doing a sloppy job on conserving ammo. This should mitigate some of that stress and allow you to keep fighting for longer.

Want even more ammo? Well here you go. 50 ammo per mag seemed a bit to much given I have to put into account multiple people could use this weapon at the same time and make being zombie unfun, which I added an accuracy debuff to balance this attachment out. You can have +20 ammo, but suffer some accuracy taken away from you.

Both of these attachments are in your secondary attachment slot.

In case you want to see what these attachments would look like and how the weapon looks with them on, you can check it here. 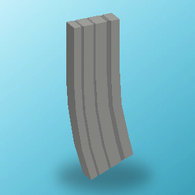 M231 Drum Mag Icon
Add a photo to this gallery

Since this weapon is pretty obscure there are limited references.

"Y'know, I can kinda see why this thing was never taken out of tank firing ports."

M231 was easily animated by bloxxerMan666. Like always, there's still room for us to possibly do animation modifers for this weapon or anything else unique, would look to get feedback on animations if you have any!

M231 is a pretty cool weapon despite being even more obsecure than any other forgotten weapons we have created. It was really cool having Legovoa come back and join us to create this idea, I'm excited to see what other future projects we can do now with these new members on the team! If you have any criticism or feedback you want to give us, post your concerns in the comments, it helps us improve the quality of our suggestions to make it even more likely these could be added to the game.

Retrieved from "https://r2da.fandom.com/wiki/User_blog:GoSinister/New_Primary_Suggestion_-_M231?oldid=871410"
Community content is available under CC-BY-SA unless otherwise noted.