If you've been hired to do one of the following jobs: click on the correct moderator role (if you have multiple roles, read all of them).
Read the page(s) thoroughly. You will be expected to learn all the commands and the proper action to be taken in the correct instances. The game, discord and wikia have their own block guides; you will use them when a user has broken rules (they are posted in the moderator role pages as well as the wikia in general).

First day on the Job

Get in touch with your superiors: They will let you know key things to know, as well as to give you a run down on how to do things (aside from the moderator guides). After that, you need to read the moderator guides. (If you have multiple mod roles, read all of them.) Read them thoroughly and don't forget to ask any questions if they arise!
Here is a table describing how much power a user with a certain role has, it is divided into two categories (Development & Moderation), the higher the role, the more power the user with the role has, roles on the same level basically have the same amount of power as each other: 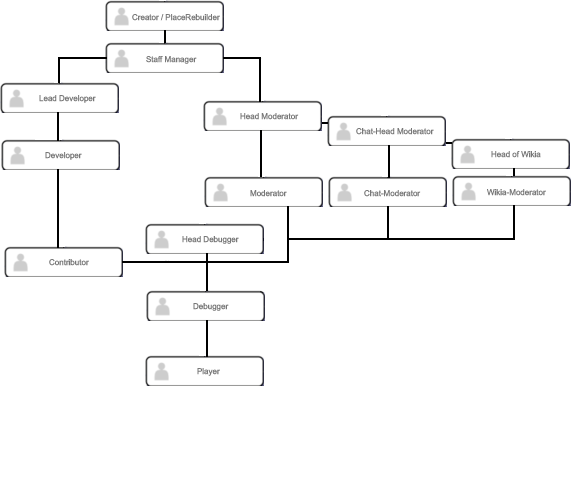 Before infractions are enacted on a moderator, it should be noted that at certain times a moderator will be put on 'probation'. This will limit their discord abilities but not in-game. They will still be able to post ban reports however. (This is the last chance for the moderator to get back on track and behave. It only applies to in-game moderators).

However, if the moderator still caught using powers abusively/broke a rule, they're either permanently demoted from discord and wikia moderation, or just get fired instantly.

Note: Majority of infraction causes will not be listed (there are too many), we understand that you won't know what's against the guidelines majority of the time, that's why we will contact you before infractions are enacted and resolve the situation.

If you're being complained that you're using your powers wrongfully / abusively, you will be punished by the following:

Note: If you are discord/wikia moderator, these apply to you as well.

Abusing powers can and will lead to an infraction. In the case of one, the moderator accused will be contacted by an admin or head-moderator If they are not able to be contacted, they will be issued the infraction without a chance to redact it.
Breaking Wikia/Discord rules will lead to an infraction, but in-game suspension dosen't apply in this case.
Community content is available under CC-BY-SA unless otherwise noted.
Advertisement