"Full auto, decent damage, more ammo and rather featherweighted for all your killing needs. Don't get too happy with it though, because the fun lasts a second or two if you don't let go of the trigger. I learned that the hard, hard way..."
―Pisihi

The Skorpion (specifically the Škorpion vz. 61) is a machine pistol that does a hefty amount of damage, but chews through ammo extremely quickly. It's very inaccurate, and has a huge amount of spread. Using its burst or semi-auto firing modes at every range except for close is probably your best bet. Although you can fully unload and usually get one or two zombie kills, conserving your ammo is key with this weapon.

The first machine pistol in the history of the SANI Virus. During the early stages of the outbreak, new recruits would always use the Uzi as a cheap, decent weapon. After the fall of the infection, the Uzi was now weak to the new zombies of the SANI Virus, so L-Brain Sidework quickly created the Skorpion. With massive spread but high fire rate, most didn't appreciate it. Many survivors detest this weapon, but it was one of the many weapons needed to combat the new apocalypse. 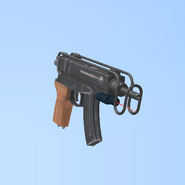 The Skorpion with the Lazex 2AA. 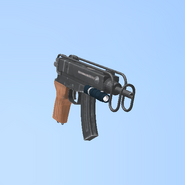 The Skorpion with the Fenix PD35. 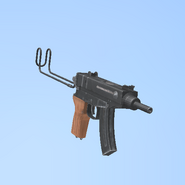 The Skorpion with the Shoulderpad extended. 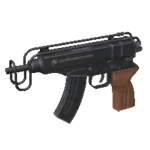 The default Skorpion with no attachments.
Add a photo to this gallery
Retrieved from "https://r2da.fandom.com/wiki/Skorpion?oldid=248790"
Community content is available under CC-BY-SA unless otherwise noted.