On April the First, it is a tradition that we (the staff team) add fake news on the Wikia/Discord to make us laugh at people falling for our jokes. This page is a summary of all the jokes we have done.

A really long Japanese sword from the past. It is commonly used by Japanese Samurai as a weapon. The Katana is known for its big grip, and curved, single-edged blade, that can easily cut through many surfaces.

After a lot of complaints by Survivors about the lack of Sword Melee weapons, L Brain Sidework decided to search for the ideal Melee weapon. One that is light, durable, and most of all, looks cool. They decided on the Katana just for those reasons.

A hat made out of straw, typically used by Asian Farmers to keep the sun out of their eyes.

How can you have a Katana without a Straw Hat? This strange hat somehow gives you more Strength and Energy to combat the undead.

Green ban reasons will receive two warnings and a 10 - 30 minutes mute before a moderator takes action, FOLLOW IT!

Profile pictures do not count.

A hat made out of straw, typically used by Asian Farmers to keep the sun out of their eyes.

How can you have a Katana without a Straw Hat? This strange hat somehow gives you more Strength and Energy to combat the undead.

An old legend returns from the dead.

The Railgun was merely a myth to survivors, some saying it existed and they have seen it with their own two eyes, others claiming that it never was an actual thing. The truth is, after the abandonment of the Railgun in replacement for the FATAL5, K177 kept the old materials from the Railgun and hoped to someday release a new one, better than ever before.

After K177 finally had the technology to reinvent the Railgun, they started without hesitation. Many survivors have rumored about the return of the Railgun, claiming they have seen parts of Railguns being transported around the world, but for now, the Railgun seems to be only a mystery.

Note that the wikia coding duplicates for the first item on the list, this is a known FANDOM bug and there is nothing we can do about it.

Note: Many of these jokes were actually real things, just that they were leaked during April Fools to give the impressions that these were jokes, therefore meaning that nobody thought that they were real, fooling them twice.

Note that only the Jacksplot boss was an official April Fools, everything else was fan made.

Lucky Laser
Jacksplot fires laser beams from the top of his head to random directions. dealing 40 damage to players that come in contact with the laser.

Coin-Bot
Jacksplot will spawn 5 Coin-Bots that will throw laser at survivors, dealing 15 damage to players.

Smash
Jacksplot will smash a random survivor with his hands, dealing 80 damage.

Smash Surprise
Jacksplot will get below the poker card platforms and start to punch random areas from the platform, dealing 15 and tripping the survivor who get hit by it.

Jacksplot 7 is a slot machine come to life. Nobody really knows why, and during the apocalypse, how things formed is the last of anybody’s worries.

You fight it in its domain, named Jacksplot Imagination.

Lost in the void.

Decapitated, the survivors will be if they lose. 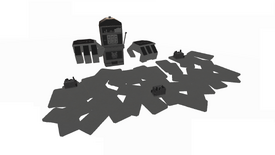 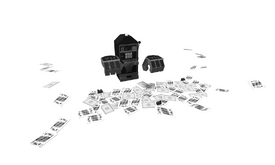 Jacksplot 7 Map Recreation (2020)
Add a photo to this gallery 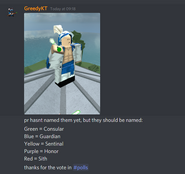 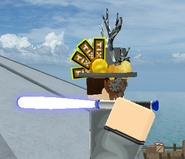 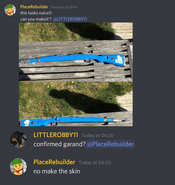 Add a photo to this gallery

Retrieved from "https://r2da.fandom.com/wiki/R2DA_April_Fools_Jokes?oldid=938392"
Community content is available under CC-BY-SA unless otherwise noted.