View source
watch 01:54
Arcane: League of Legends - The Loop
Do you like this video?
Play Sound

The In-Game Store can be accessed by pulling the Leaderboard up (Tab Key) and navigating to the "Shop" tab.  Depending on what team the player is on, survivor or zombie, different items are available. 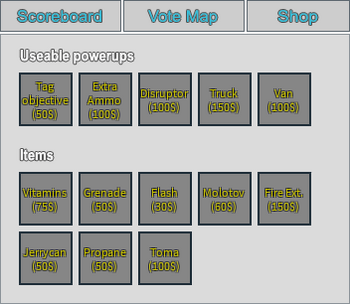 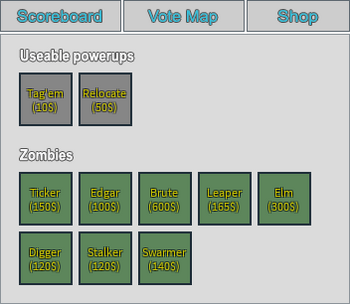 The items supplied in the shop are generally more expensive than items bought from the menu and can only be purchased once per round.

There are cooldowns that start as soon the player dies as these mobs, just to be fair for the survivors. The player cannot buy zombies until after a minute has passed in the round.

There are no cool-downs in the Survival Unlimited Universe.

Community content is available under CC-BY-SA unless otherwise noted.
Advertisement