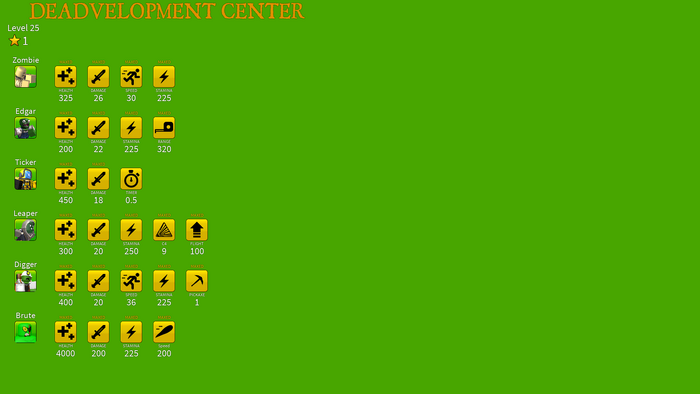 The Deadvelopment Center is, as its name implies, a center where you can upgrade each zombie and their abilities. You use skill points, which are gained by fulfilling tasks within a round, as a currency for upgrading. Unlike the Zombie Levelling System, skill points, levels and statistics gained will stay between rounds, even if you become a survivor between rounds.

Below is a list of each zombie and their upgrades. The Skull Champion, Swarmer, Elemental and Stalker do not have upgrades in the Deadvelopment Center.

This replaced the Zombie Levelling System in v1.4.5.

Note: All upgrades cost 1 point (except Digger Pickaxe which costs 6).

You gain Skill Points by levelling up (3) or starting as a zombie during the round (10). Skill points save between rounds, so long you don't spawn as one of the initial zombies (which resets your points down to 10). Upgrades are also saved, so long you don't leave the server.

There appears to be an infinite amount of levels. The graph below show how much Experience points is required to level up to 10, though the game can go past that. Levelling up shows a clear pattern of 5+3+4+5+6+7+..., respective to the rank.

Retrieved from "https://r2da.fandom.com/wiki/Deadvelopment_Center?oldid=942172"
Community content is available under CC-BY-SA unless otherwise noted.