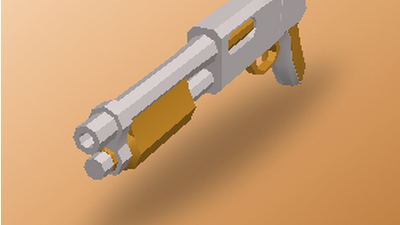 The Shotty 12 is a basic short-ranged shotgun that packs a huge punch. As such, it is to be feared at close range but due to its not so good range and accuracy, it's to be made fun of at medium range. Shotguns are simple weapons. This one is no exception. The power of shotguns to decimate the...

A tier list of all MR weapons. I consider MR rank to be 10-40. May change this later if I disagree with it later on, and tell me why you disagree and why you hate me, unless you think AK47 is a good gun. In that case don't, just read my comments on the Dragunov and AK47 page, I've talked enough crap about that gun. Guns in the same tier are better depending on when they are listed, the first guns listed are the best. Also I don't take price and rank into account, so just because a weapon is listed high doesn't mean it's the best weapon to get for that rank, as it's cost efficiency or rank efficiency can be awful, this is just raw stats comparison. The placement of weapons is determined by their optimal attachment combos. Special ammo is not taken into account for the most part, it's only relevant for the M1 Garand and Minigun. Every other weapon is not affected by special ammo in a major capacity. Lastly, if you see a secondary above a primary, it's because it serves better as a weapon, not because it has better stats.

Edited because I forgot Barret and CK Swat, silly me. I always associate them with HR sweats, so I must of forgotten they are MR weapons.

someone cool enough to make a new model(model)

TURNED INTO A SECONDARY!

The Shotty 12(now transformed into Serbu Super Shorty,S.S.S. for short) is a basic short-ranged shotgun that packs a huge punch. As such, it is to be feared at close range but due to its not so good range and accuracy, it's to be made fun of at medium range.

Shotguns are simple weapons. This one is no exception.

The power of shotguns to decimate the undead is something all survivors appreciate. No other gun has the aptitude for such close-range destruction and all shotguns are reliable for veterans and beginners alike.

The S.S.S. adds much-needed versatility to the survivor's arsenal of these shell-firing behemoths, making it slightly different from its brethren in that it has far less weight and size. R-Brain Hardwork does like the motto of "If it's not broken, don't fix it".

Peacemakers and Mini Uzis will have both of them tilted together, like you might seen in FPS games and Movies. Minigun, you will stand still or your movement would be reduced greatly. Shotty 12, I'm currently thinking of what is should be.

See "Changes" for tweaks and fixes to this weapon.

2 (ONLY with Slugs attachment)

The perfect weapon to complete the Mini Uzis, the KSG is a shotgun that, along with having customization options for its bullets, packs quite a punch. It has a bit of a wide spread, but is most useful in outdoor environments.

With the success of Sinister Arms Inc., R-Brain Hardwork wanted to come back and take over the competition. They barely had enough funding to complete their P90 project, and the discontinuation of their older weapons took a toll on the company, and many were doubtful of its future.

They had to think big on their next project. They noticed there weren't enough shotguns on the market, and demand was clearly high for one, so with what little funding they had, they pumped out this beauty.

Let's just hope this thing makes a pretty penny, otherwise this may be the last of R-Brain.

Considering it's size, it could be used as a secondary, making a overpowered loadout with guns like the Barret .50c or M249. This'd  probally result in it being higher ranked and more expensive

what does the shotty have

what does spas have

what does shotty have

what does spas have

i have enough money for Shotty and Thompson but im stuck in between buying a weapon or farming for mini.

(Edit: I bought the Thompson and I love it.)