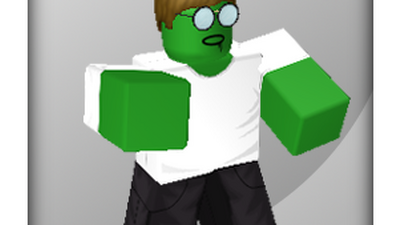 What zombie game doesn't feature their own set of unique mobs? Infecteds are the constantly-respawning players that survivors must fight off and kill for fame, glory and fat stacks of gold. Every single one has their own abilities that set them apart from the rest. The goal of one is to work... 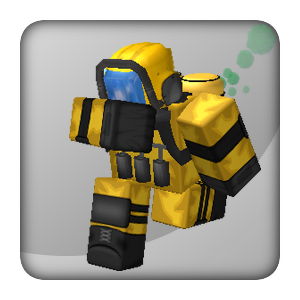 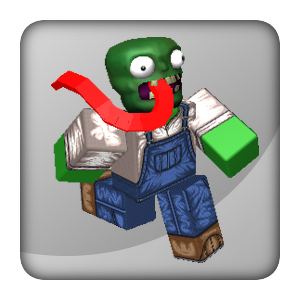 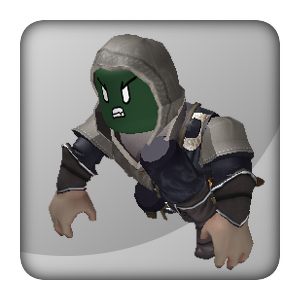 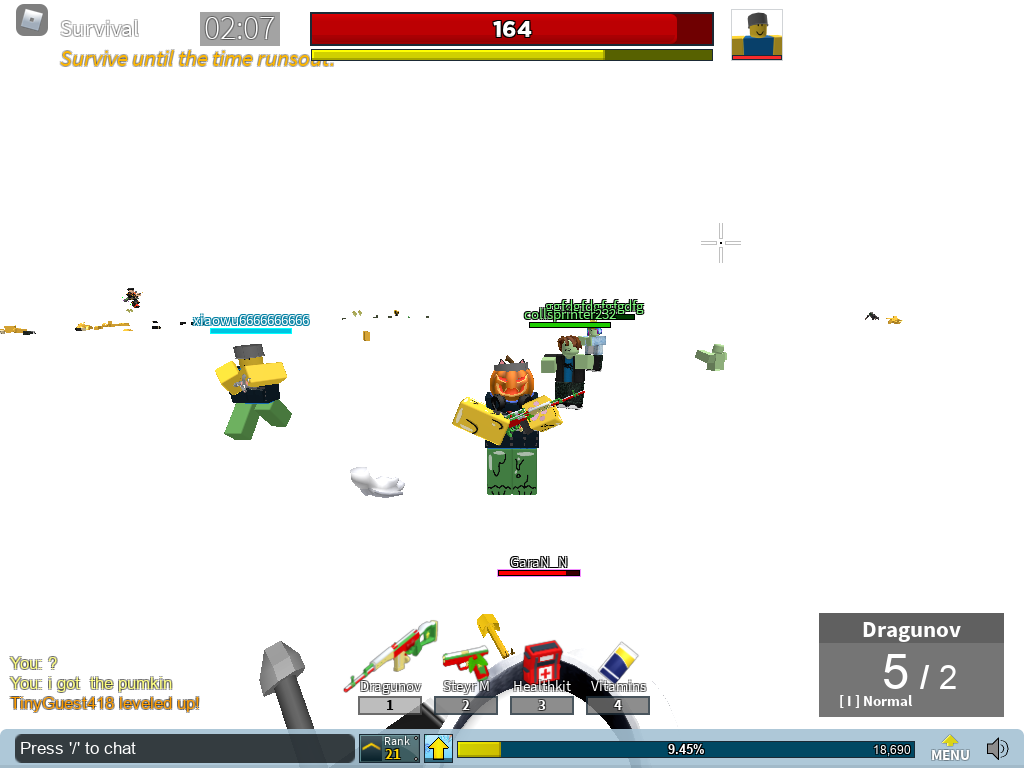 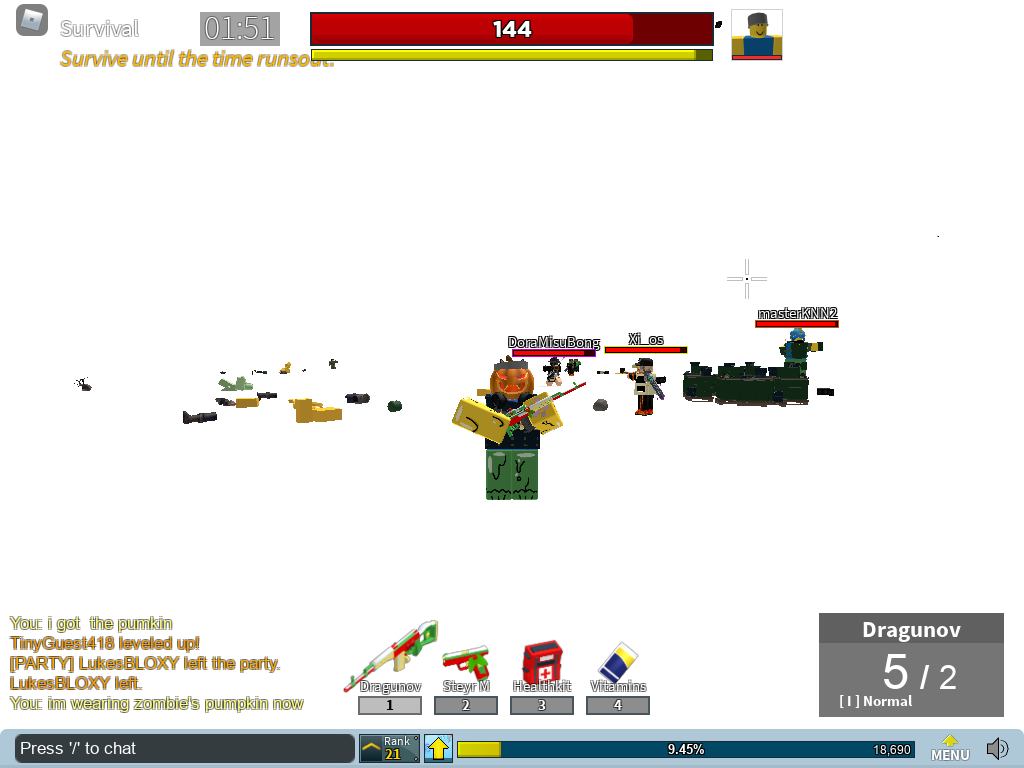 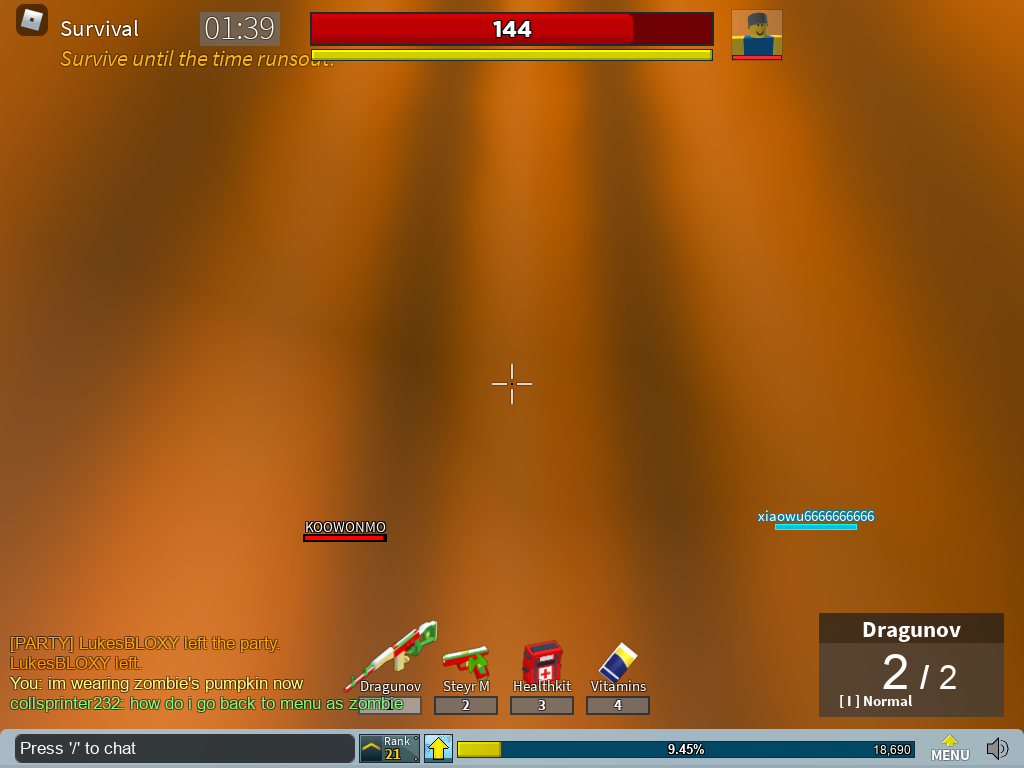 After that i never get it again.

Photos made on November 27th 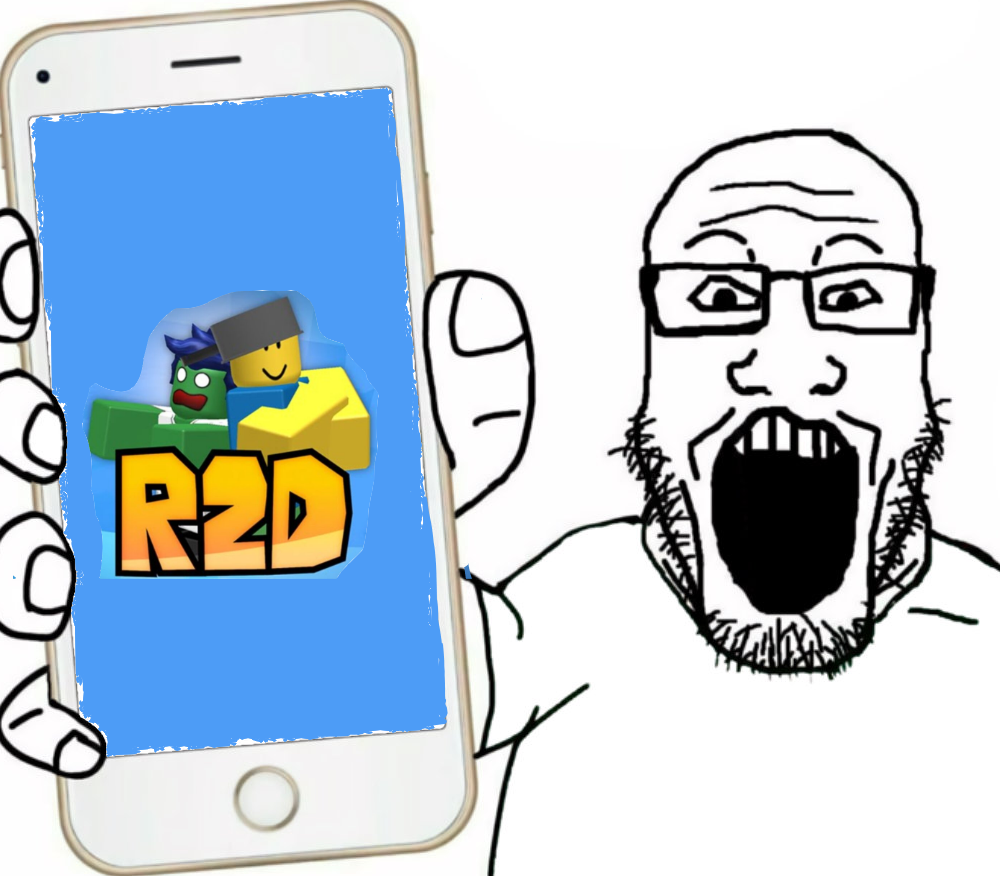 Its this cool zombie shooter based off l4d, there are many types of guns and zombies. The community is kinda bad an toxic but that doesn't matter. But i have to warn you the game requires alot of grinding and it gets boring after a while. Oh i almost forgot there are seasonal events that add bosses and cool event items but that also gets boring pretty quickly. 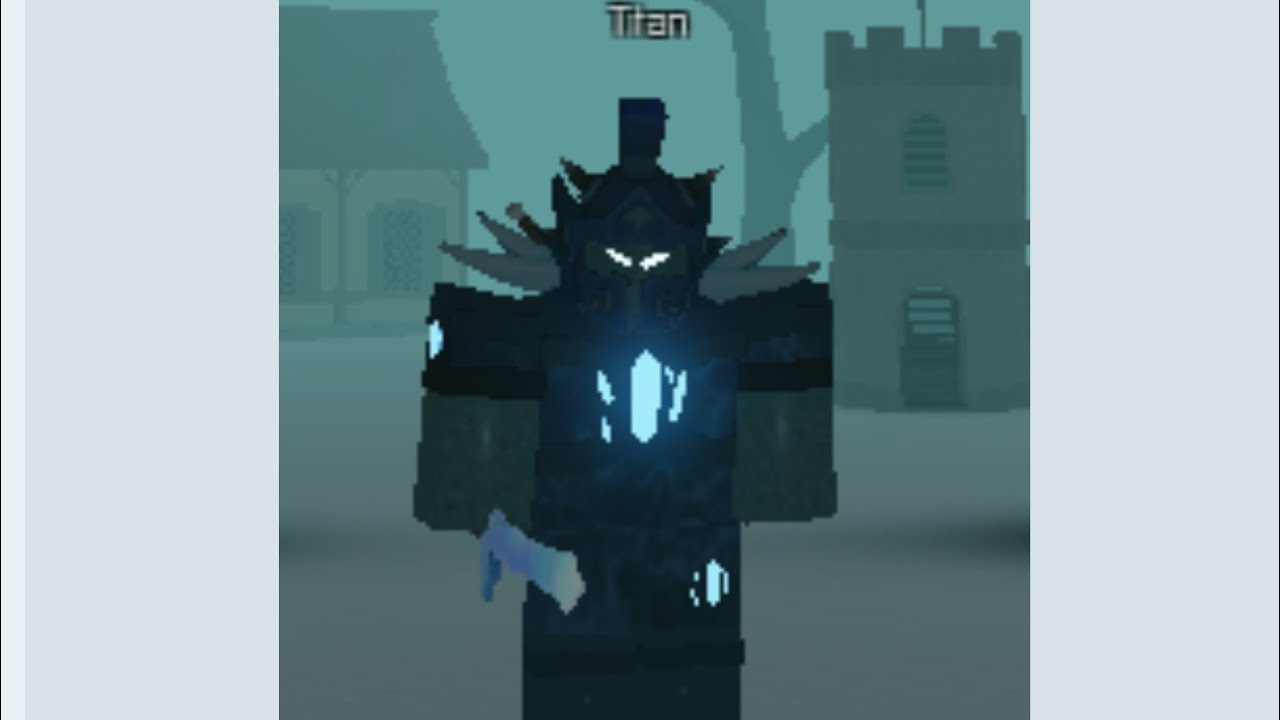 Backstory: Bearing strength similar of the infamous and feared Skull Champion, these titans are one of the most strongest troops defending the (boss arena goes here). Wielding giant ice swords capable of dealing frostbitten wounds and the strength to throw heavy objects, these titans seem to be have created by something only a handful of us can remember.

The Ice Titan swings its sword. Anyone caught is instantly frozen for 5 seconds and will be dealt 50 damage

The Titan will stop and pick up a giant piece of the ground, and will throw it at them, similar to Captain Crabs sand throw move but longer animation and object

Stay away from it at all times, if you get slashed by one of these bois, you are easily vulnerable to other titans

Wearing ice proof armor is recommended, as you can simply get dealt damage and get ragdolled by Attack 1.

Inspired the titans from tb/tbbf lolololol 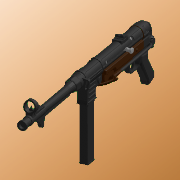 Currently Working On Them Lol.

Description: r2da player turned into a no life person who hacks and ruins fun for everyone in roblox.

Lore: some r2da player sucked at the game and decided to hack because they are trash.

Cons: targeted by mods and vote kick powered r2da players, trash at the game and should get another hobby

Stats: 100 hp 100 stamina can wear any armor that's in the game can use items and weapons

Pros: kills zombies can self heal may work with each other

Cons: can die and may or may not kill other r2da players and also be toxic mostly they work by them self's

For each zombie type, there's a champion

Abysmal health (7500, can easily be killed by rpg spam)

Can't go through doorways (4x the size of a normal zombie)

Buffs other normals nearby (speed, dmg and health +25%) by pressing e shield button on mobile. (idk for console).

Big target (3x the size of a normal zombie)

Self-Destruct ability by pressing e on pc, and shield button on mobile

Self destruct makes you explode

Self destruct takes a second to use

Self destruct has small explosion radius (for obvious reasons)

3.5x the size of a normal zombie

Instead of a club, they get rocks to throw

More health than a brute 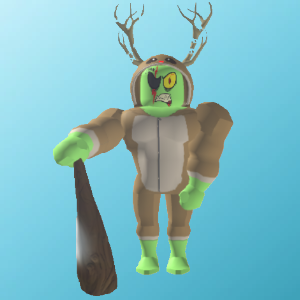 I saw some people criticizing it as “rushed event” and etc, i just wanna hear what you think about it?

I know its too early but im quite curious

During the start of the year of 2013, some people still didn't take the vaccine that cured/prevented cancer. But they weren't forced to, mostly people who were the age of 9-23 didn't want it. In February, some people that were vaccinated were starting to explain that they felt uncomfortable from the inside. Doctors started studying this, but the SANI Virus was already on the move. In April, the victims were starting to act off in public places, wanting to grow closer to people physically. Soon after in May, some victims started having their skin an unhealthy green. Doctors studied more into it, not knowing that it was SANI that was causing it. In June 13th, the news reported people being attacked by others, some even leaving bite marks or scratches in the arms. Sometimes even in the neck.

The un-vaccinated started guessing it was because of the meteor, because normal humans wouldn't do that, right? Maybe it was that or something else...

People started to protest, saying that this vaccine isn't right, something is going on.

The governments around the world started hearing about this, but they simply waited to see if that's true. Soon enough, in July 20th, Military personal were reported missing, some even losing control of their bodies, turning handguns on their own comrades, even turning it on themselves. People all around were started to experience loss of vision, seizures, and their limbs shaking every 2 hours.

The un-vaccinated protested more and more, even turning to riots to get rid of the vaccine from shelves. Something was not right, and they don't want it to happen any longer.

Governments contacted their great scientists to research all of this, seeing what's happening to the vaccine. So they researched and researched, but the only report they got was that it wasn't the cause.

Some said the Virus moved silently, others saying that they were simply lying.

The protests started growing more and more violent, some even preparing for the worst.

Markets started running out of supplies in August, Bunkers being stocked. They knew something was going to happen, but they didn't know what.

In September 9th, the world was on fire.

The vaccinated had their last 30 seconds of life left before they shook, on the floor, their blood pumping faster every second, their brains possessed by the SANI Virus.

The world was in chaos, the military tried to counter the attacks, only to have their men infected while fighting. The Military was crippled, the cities destroyed. Groups of un-vaccinated quickly fell and separated as humanity was destroyed from the inside out. In the first 24 hours, 98% of Humanity had quickly fallen into abominations they haven't prepared for. 2 Days later, the remaining governments around the world had come together, pooling their resources to repel the zombie threat. Casting their differences aside, creating weapon manufacturers as quickly as they can.

7 Years later, nothing has changed.

As the zombies grow stronger, so does Humanity.

How long will this war last?

What part will each survivor play as the end grows close?

How will it end?

What Chapter is Humanity in the story of life?

Is Humanity a latecomer in the cosmic stage?

Just how ancient could life be?

For its first few million years, the cosmos were too hot for life as we know it.

Once it was finally cool enough for life, there was only gas clouds, no stars or planets.

70 Million years later, gravity took hold of these clouds and created the first generation of stars.

The first few stars were massive and bright, but life was not there to watch it rise.

After years and years pass, these stars finally exploded in a blaze of fury.

These stars then helped gravity in creating a second generation of stars, this time with rocky planets with them.

This was it; the raw ingredients for life, 13.7 billion years ago.

And here, the first few bacteria were formed, in a rocky planet too far away from the star. It was the Goldilocks era, with space going as cool as 75 degrees F. Like an endless summer day on Earth.

As the bacteria grew in numbers, so did its complexity.

Evolved so much that it couldn't be considered basic bacteria anymore.

Most of the bacteria died from the explosion, though as we know it, life can adapt quite quickly.

So as very few survived, they all split apart by the rubble carrying them out into the void.

It was rather quite slow, some black holes consuming them, others being caught by other planets.

There was three meteors left, one making it in our solar system.

In September 17th, 2009, The Meteor crashed in the deep waters in the Gulf of Bothnia. As Humanity inspected the meteor, they found the same bacteria that was formed billions of years ago. They studied it, tested it, and after 2 years, was figured that it could completely cure Cancer. Scientists from around the world decided to build a lab near the crash site, testing more and more of it before releasing it to the public. As it did provide a cure for cancer, very few refused to get vaccinated by it, explaining that it isn't right.

And right they were.

On September 9th, 2013, Everything went downhill. The bacteria now known as the SANI Virus, slowly made its way to the brain of the victim, then gaining control over it before spreading it to anyone else.

Unfortunately, 98% of Humanity (or 6.8 billion if you don't know) has been vaccinated and infected by SANI, causing Civilization to ultimately collapse.

Time went on, the Virus evolving faster than it could be cured and researched, making it to what we know of today.

I have here a poll for the most dangerous zombie, after some time I'll make a chart. As with polls your all biased most likely and opinion based. Now there is nothing to be ashamed of because the point of a poll is that sum up what a group of people (if you are human unlike me) think about something. I sound like a teacher... well...

Before you will change visual settings ima show screenshots how it looks on my desktop vs my custom settings, also don't use programs such as razer cortex or etc 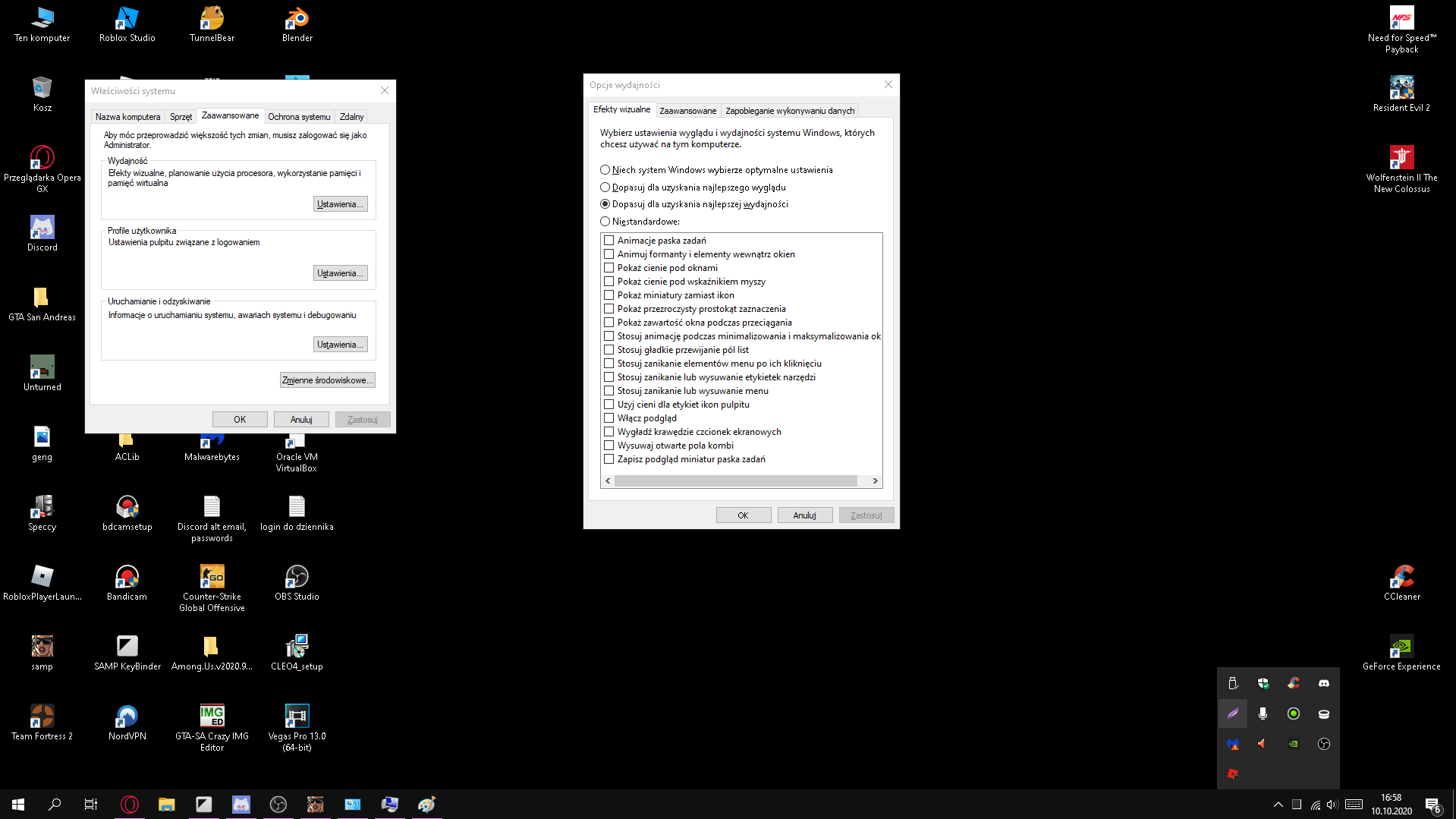 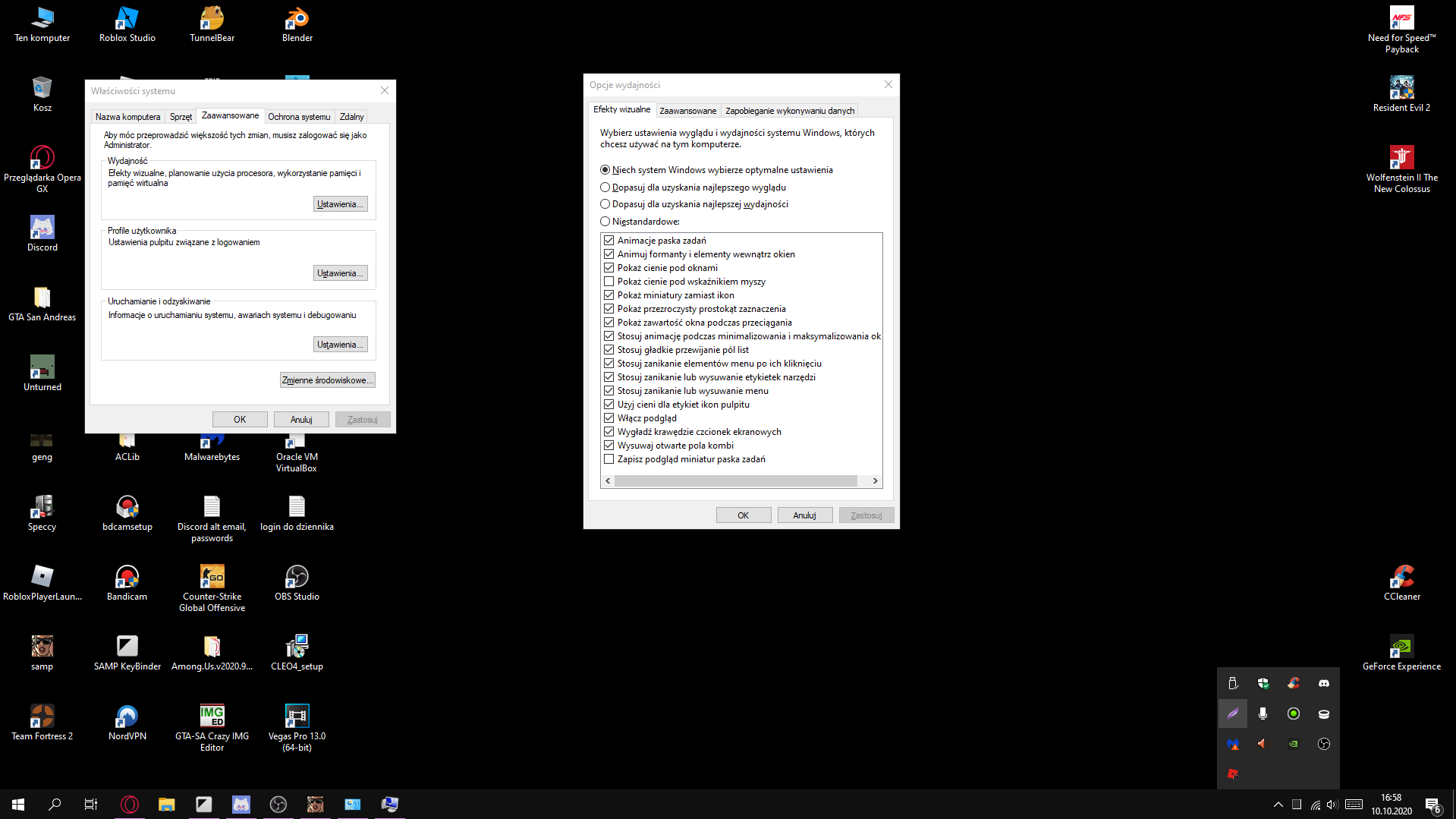 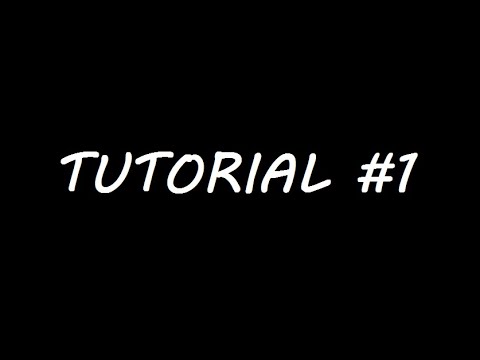 How to use the dragon mount:

The dragon mount is similar to Toy Plane, But you shoot fire at zombies or other mobs

You should add two fuels to the dragon mount, The fire fuel, and the flying fuel

The flying fuel - WASD to make him fly around

To make him stop flying, Press E, He would stand

To make him fly again, Press the spacebar two times