EDIT: 2/19/2020: got feedback from certain people in the community and even HIM, so im nerfing some stuff like the damage and firerate, also made some grammar corrections

Firerate: 0.33s -> 0.4s (slightly faster than Peacemakers if they were an automatic)

A lethal forgotten weapon, the Jackhammer ignores the weaknesses of typical shotguns, utilizing a drum magazine and an automatic firing mode to shred through hordes. It is considered the pinnacle of the shotgun tree in R2DA, being the highest ranking weapon and most costly shotgun. 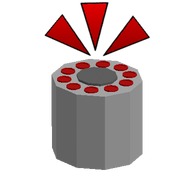 Jackhammer has to be the hardest weapon to balance in terms of its actual stats and the Bear Trap Mine. It was very difficult to find a sweet spot that we can do with the Bear Trap Mine, we went through countless versions of the mine like having it use claws to hook onto an enemy and blow up, if they survived they would've permanently lost the limb that it hooked onto, it could hook onto the head in that version of the idea. Many versions of the mine seemed useless, but we found something satisfactory everyone can agree on. We also had trouble trying to find a good way to balance it without making the gun overly overpowerd (as it might look from the current stats). It's suppose to be the highest ranking shotgun and be the best shotgun in the game, which is why we felt the way we made the stats the way they are at launch.

whatever you say, BOOMER

This seems a but underpowered for its rank, price and only 10 round mag