I thought it would be interesting to take a look over the mount gamepasses bought over the years in R2DA. After looking through all of the gamepasses, I've come to pretty interesting conclusions:

I was bored so I wanted to do something to spend my time off :P 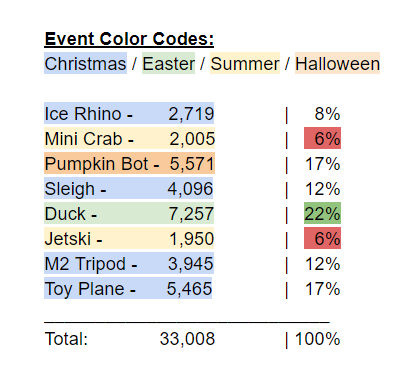 I sometimes play with no mount. It is still pretty easy to survive with the right skill.

You atleast have the weapons but think about the new players

To be honest, I do wish new players get the chance of having mounts without having to worry about time (a perm mount for in-game gold or by robux). They're fun to play and experiment with but difficult to obtain during events.

Pumpkin bot got 2nd highest but its really bad